Many of today’s firms are opting for office environments with open spaces that house pods of people who work on similar projects. Teams can collaborate more easily and solve problems more quickly, thereby increasing productivity. 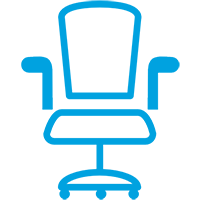 As it turns out, though, you might want to take your seating arrangements to the next level. Research from the Kellogg School of Management at Northwestern University found that employees who sat within a 25-foot radius of a high performer increased their own performance by an average of 15%. Furthermore, two workers with different strengths that were seated close together seemed to pick up on each other’s best practices with both showing increased performance levels.
Unfortunately, this phenomenon—known as the spill-over effect—works in reverse too. Low performers who were eventually fired negatively impacted the performance of those around them… and they were able to spread their negativity and poor performance beyond a 25-foot radius! Furthermore, whereas the positive improvements typically take more than a month to become evident, the impact of toxic workers is almost instantaneous.
Paying closer attention to seating proximity could be the difference between achieving company goals and a dysfunctional downward spiral. Assess the strengths of your team members, then figure out a seating arrangement that will be beneficial for everyone. Finally, put the desks and chairs previously used by toxic workers in storage—you won’t need them anymore!
Quote of the Week: “If it’s the right chair, it doesn’t take too long to get comfortable in it.”
—Robert De Niro

Looking to spruce up the office?